“I am very happy to be in this role and I enjoy the challenge and reward it provides. But when you ask me if I am content – I have to honestly say I feel guilty about not being there enough for my family and actually feel quite lonely a lot of the time”.

This was the reflection of a CEO client. They were “successful” and had worked long and hard to achieve it. Their ambition had enabled their success on one level, but the rewards had come at a cost. This is not uncommon. Ambition is admirable but its relentless drive can have negative personal and relational impacts.

Ambitious people are shown to be more educated, have higher status jobs and make more money. “This often comes at the expense of close relationships and personal wellbeing”, was the comment of Nicolai Tillisch, in a recent Leadership Diet podcast (link). Nicolai is co-author of the best-selling, Return on Ambition: A radical approach to your achievement, growth and wellbeing, which has just been nominated as one of 10 finalists in getAbstract’s 2021 international Book Award. Grounded in research it is a work he developed with a McKinsey colleague, also with the same first name, Nicolai Chen Nielsen, to investigate and remedy the dark sides or underbellies of ambition.

Nicolai shared with me on the podcast, while the vast majority of executives consider themselves to be successful, the majority also confirmed they struggled to balance the achievement of their aspirations with personal growth and wellbeing.  “The research shows it is correlated with a higher level of stress, burnout and depression”, Nicolai explained.

This can be attributed to:

In their book, Nicolai and Nicolai have developed a useful equation that emerged from their study into ambition.

As a holistic measure of being a fulfilled human being, the equation recognises that return on ambition is dependent on the:

Interestingly, the lack of development is a more significant contributor to burnout than hard work itself.

Organisations with effective onboarding programs have 2.5 times more revenue growth and 1.9 times greater profit margin than those without transition programs in place.

Truisms of Return on Ambition

Understanding the realities of ambition are helpful in increasing awareness about its implications and what that means for you:

Frenemies of Return on Ambition

One concept I found very useful in Nicolai and Nicolai’s book is the one of Frenemies. The things that have helped us to succeed, when overused, can become liabilities. These tendencies are “frenemies” – part friend / part enemy. There is nothing wrong with the tendency itself. What is needed is awareness and control of our use of the tendency so it is only utilised where and to the amount it is useful. We also need the flexibility to reach for an alternate strategy when the usefulness becomes a cost. 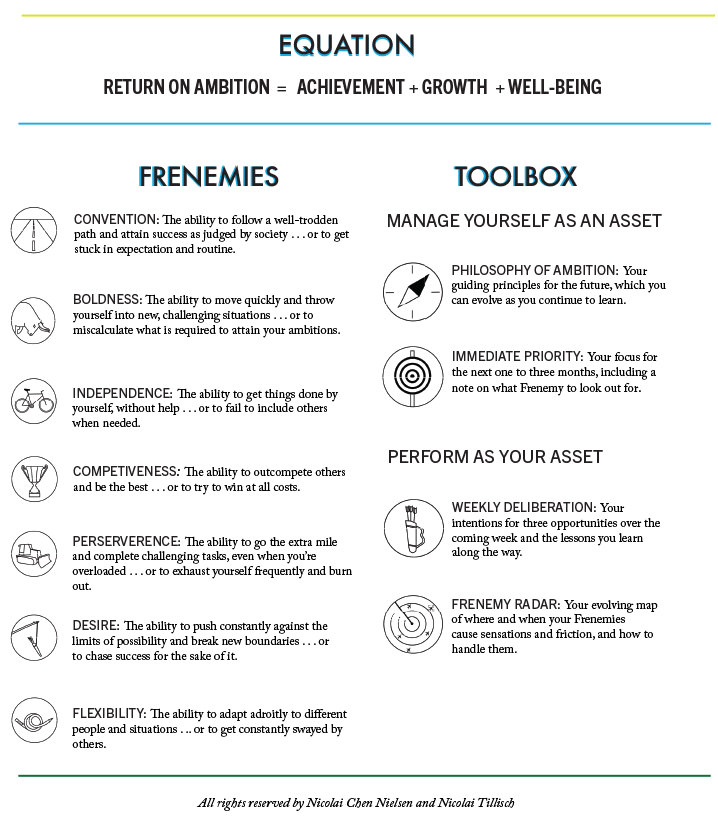 “I have no spur
To prick the sides of my intent, but only
Vaulting ambition, which o’erleaps itself
And falls on the other.”

Given the majority of listeners to The Leadership Diet are successful executives or those who support successful leaders, the notion of both the upside and downside of ambition will be very familiar. What might be less familiar is what to do about it.

I recommend starting here or here and assessing how ambition is helping you (or not!).

Our weekly podcast is a series of interviews with leaders and experts.
We uncover all things that lead to great leadership.