What I learned from talking with Padraig O’Tuama on our podcast.

Because what’s the alternative?
Because of courage.
Because of loved ones lost.
Because no more.
Because it’s a small thing; shaking hands; it happens every day.
Because I heard of one man whose hands haven’t stopped shaking since a market day in Omagh.
Because it takes a second to say hate, but it takes longer, much longer, to be a great leader.
Much, much longer.
Because shared space without human touching doesn’t amount to much.
Because it’s easier to speak to your own than to hold the hand of someone whose side has been previously described, proscribed, denied.
Because it is tough.
Because it is tough.
Because it is meant to be tough, and this is the stuff of memory, the stuff of hope, the stuff of gesture, and meaning and leading.
Because it has taken so, so long.
Because it has taken land and money and languages and barrels and barrels of blood.
Because lives have been lost.
Because lives have been taken.
Because to be bereaved is to be troubled by grief.
Because more than two troubled peoples live here.
Because I know a woman whose hand hasn’t been shaken since she was a man.
Because shaking a hand is only a part of the start.
Because I know a woman whose touch calmed a man whose heart was breaking.
Because privilege is not to be taken lightly.
Because this just might be good.
Because who said that this would be easy?
Because some people love what you stand for, and for some, if you can, they can.
Because solidarity means a common hand.
Because a hand is only a hand; so hang onto it.
So join your much discussed hands.
We need this; for one small second.
So touch.
So lead.

Originally published in Sorry for your Troubles (Canterbury Press, 2013).
Copyright © 2013 by Pádraig Ó Tuama. Reprinted with the permission of the poet.

To start with, I highly recommend you listen to Pádraig reciting this poem on the Leadership Diet podcast episode here (scrub forward to 11:06).

I don’t normally have poetry recited live on our podcast but this was a special occasion.

This poem was written as a reflection on the event of Queen Elizabeth II and Martin McGuinness, Leader of Sinn Féin in Northern Ireland and former IRA Commander publicly shaking hands in 2012. The Queen and McGuinness represented opposing sides of a long and bloody history of conflict. Shaking hands could not change the past but it signalled a possible, different future. This simple but loaded gesture was a signal of intention. It was not the final word but an excellent first word in demonstrating the intention of trying to move forward in a positive way. It changed the plot.

The gesture showed they were willing to personally connect with someone who was previously been regarded as the enemy. This was also risking the scrutiny of their own communities who are heavily invested in the past. By reaching out they were signalling that there is less need for fear and hostility than previously thought.

In the words of the poem:

“Because some people love what you stand for, and for some, if you can, they can.”

In a recent Leadership Diet podcast I spoke with the author of this poem, Pádraig ÓTuama This Pádraig (he has the same name as I do, but is far more skilled in so many ways!) is a poet, mediator, theologian, and a specialist in exploring language, power and in mediating conflict.

The conversation provided a powerful insight into the imperative for leaders to ensure their gestures have integrity to deliver the impact that matches the intention. It provides the opportunity for leaders to change the plotline of what is happening in their spheres of influence but to do so requires courage and vulnerability.

The space between intention and impact

It is common that we judge ourselves by our intention, we judge others by their impact. A significant portion of development work that we do is focused on helping executives understand and bridge the gap between their intention and their impact.

In relation to this Pádraig cautions suspicion of gestures and the underpinning intention as they can be hollow. He says we need to measure the space between intention and impact. We have all created or been on the receiving end of situations where the impact of decisions and actions is way from what was intended.

Many leaders and organisations are guilty of demonstrating gestures or symbols in a half-hearted way. This may be to placate, be seen to be doing something, check a box. What a waste of time and resources! It is quickly obvious where there is no integrity, that the gesture is hollow and there is nothing tangible behind it. The impact is to leave a sense of distaste about the leadership and the leaders.

Merely claiming “it was not my intention!” does not abdicate responsibility for addressing the consequences. A more constructive and integrity-filled starting point is “whatever my intention – here is what it caused and now let me be accountable”. The gesture of making amends needs to be tangible, not just words. The leader needs to “take the risk of doing” in the hope this creates opportunities for further risks to be taken by themselves or others to bridge the gap between intention and acted upon impact. So, the test is “does the gesture have integrity to it?” Be aware that no one thing is ever going to be enough but it is a starting point from which things can be carried forward.

“We wouldn’t be doing our work if we weren’t fighting. The real question is ‘What is the quality of the fighting?’”
Padraig O’Tuama

“Conflict has a phenomenally predictable plot,” says Pádraig. It always trends toward each party seeking dominance.  Leaders have the ability, through their gestures, to change the plotline of the situations where they are a major player i.e., in a Board or Executive Team meeting or when acting as an organisation delegate. All of these circumstances will involve competing interests and conflict.

Conflict has a bad reputation. Usually, because its energy and potential are not realised. Pádraig says “we wouldn’t be doing our work if we weren’t fighting. The real question is ‘What is the quality of the fighting?” There is not enough focus and process on enabling respectful disagreement and arguing well to make inroads to create dialogue.

This has to do with the intentions of the people involved and the environment in which it occurs. Quality fighting happens where there is no recourse to threat. Threat in the corporate context can show up as ostracising, ridiculing, isolating, withdrawing etc. This means we can tap into the creativity to come up with something that would previously have been unthinkable.

This requires creating dialogue. Quality dialogue starts with intention. Padraig says his experience in mediating long term and historical based conflict suggests It involves truthfully answers to the questions:

What is my (real) position here?

Sometimes people are unaware of their positions. This lack of clarity can show up when people and teams get stuck. It is not uncommon that people in teams to be stuck on positions (these are usually dressed as intellectual debates) but it really comes about because people are committed to not moving forward. While they are declaring a public intention of wanting to move forward, they are holding a private position that is wedded for whatever personal, political, power or other reason, to remaining in conflict.

What to do? Be curious about how interested people are in changing the plot or is this just a theatre for you to say what they have been storing up to say?

“Be curious about how interested people are in changing the plot.”

Facing your own resistance to the thing you are saying you want is painful – it hurts. It is one of the complexities to being human. Read the book, Immunity to Change, if this is of interest to you. Facing your own/ our own resistance is not about shaming people about hypocrisy it is about understanding the truth of where we are at so that we can be clear about what needs to be done to get to where we want to be.

If you would like to speak with us about how you can close your gap between intention and impact or change the plotline, we would love to hear from you. 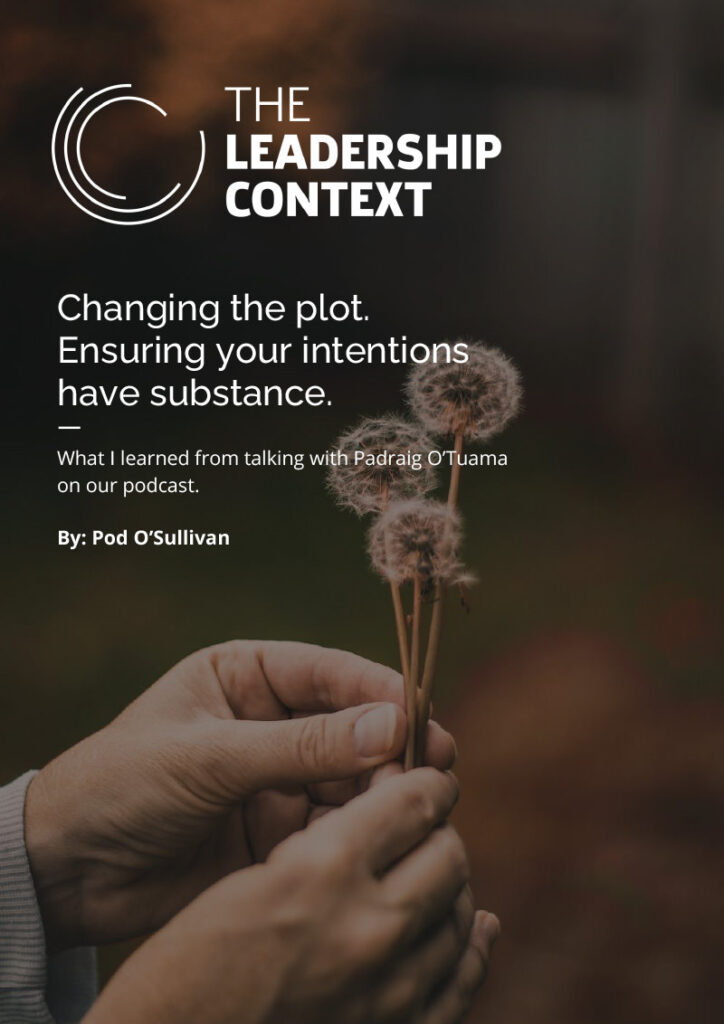 Our weekly podcast is a series of interviews with leaders and experts.
We uncover all things that lead to great leadership.